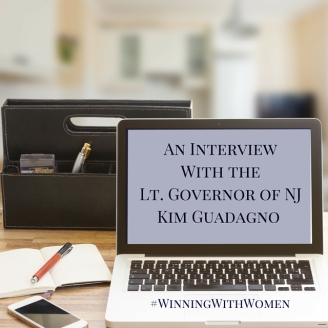 Back in November of 2015, MILSPRAY® had the pleasure of interviewing the Lieutenant Governor of New Jersey, Kim Guadagno.  Lt. Governor Kim Guadagno has been a lawyer for more than 33 years and an elected official for 10 years. She was born in Iowa but lived all around the country as her dad changed jobs almost 20 times before she went to college. After graduating from Ursinus College in Pennsylvania in 1980 and American University Law School in the District of Colombia in 1983, she first practiced law in New York City. In 1988, she landed her first job in public service as a federal prosecutor with the Organized Crime and Racketeering Strike Force in Brooklyn. After her marriage in 1991, Guadagno moved to her new husband’s home county of Monmouth in New Jersey, and began serving as an Assistant U.S. Attorney in Newark. In Newark, she specialized in public corruption cases. 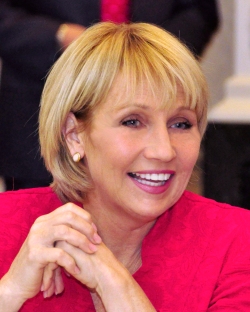 Next, Guadagno served as Assistant Attorney General in New Jersey, serving as the Deputy Director of the Division of Criminal Justice until 2001. Her first elected office was as Commissioner in her small town of Monmouth Beach as the head of Public Works from 2005 – 2007. In 2007, Guadagno became the first female Sheriff of Monmouth County. As Sheriff, she ran a 650 person law enforcement agency and earned a very rare five star accreditation for the institution. From 2001 to her election in 2009, Lt. Governor Guadagno also taught at Rutgers Law School-Newark.

Kim Guadagno was sworn in as New Jersey’s first Lieutenant Governor on January 19, 2010, and was re-elected to a second term on November 5, 2013. Lt. Governor Guadagno serves concurrently as New Jersey’s 33rd Secretary of State. She has been married for 24 years and has three sons.

1. Kim, I know our readers would love to know, in your own words, how did you arrive at becoming the first Lt. Governor and Secretary of State for New Jersey?

I felt I was uniquely qualified to do the job as a result of three decades as a lawyer and prosecutor; a manager of a law enforcement agency in the Attorney General’s office; and the leader of the multifaceted Office of Sheriff of Monmouth County. Since there had never been a Lieutenant Governor before, I was interested in the challenge.

I did not know then-candidate Chris Christie well when he asked me to run with him, but we were both Trenton outsiders and former federal prosecutors. I realized that, together, we could really make some significant and important changes for New Jersey. I accepted because I knew it was the best way that I could give back to my state. We had a very clear vision of what needed to be done and I have focused on areas that have been ignored by previous administrations: job creation, business retention, tax relief, and cutting red tape.

2. Can you please describe what your role as the Lt. Governor and Secretary of State embodies…What are your main responsibilities and duties?

My most important job of course has been serving as the acting governor over the last six years when the Governor is out of state. As Lieutenant Governor and Secretary of State, the largest part of my work is overseeing the New Jersey Partnership for Action (PFA), the State’s four-pronged comprehensive- and award winning if you don’t mind a little pat on the back- economic development strategy.

I have traveled the state from top to bottom visiting hundreds of companies and speaking to thousands of employers, putting more than half a million miles on the government truck (actually several trucks) over the years. I have given out my cell phone number to tens of thousands of people. The best part of my job has always been to speak to businesses one-on-one and to be able to fix a problem for the people who work at these companies and who, quite frankly, pay for the truck and pay my salary.

There is probably nothing more fun than having someone call me for help and having them spend the first 30 seconds of the call saying something like, “I never thought you would answer your own phone!” Hey, this is New Jersey. You don’t give out your cell phone number unless you expect people to use it!

I serve as Chair of both the Red Tape Review Commission, which is engaged in an ongoing review and reform of the State’s regulatory process, and the New Jersey Military Installation Growth and Development Task Force, which works to secure the long-term growth and viability of New Jersey’s military bases and U.S. Coast Guard installations.

Additionally, as Secretary of State, I serve as New Jersey’s chief election official, oversee promotion of the state’s $42 billion tourism industry, and administer programs related to the arts, culture, and history. Finally, I supervise the Division of Programs (including the Office of Faith Based Initiatives and the Center for Hispanic Research, Policy and Development) and the Governor’s Office of Volunteerism, including the State’s Americorps program and New Jersey’s Commission on National and Community Service.

And, to an audience of women, I like to joke: I get one salary and no pension.

I like to emphasize that I was a lawyer doing what I love for decades, before I decided to serve my community in elected office. In 2007, I ran to become the first female Sheriff of Monmouth County. During that race, I was told that sheriffs don’t wear pink. What “they” said was that people expect their sheriff to wear a gun and a ten gallon hat – not high heels and certainly not pink – not today, or ever. Isn’t that just another way of saying women can’t be sheriffs? You know, even though Sheriffs don’t wear pink, I did win that election as the 75th Sheriff of Monmouth County. Any challenges I faced were overcome with hard work, study, collaboration, and common sense leadership. And I’m certain that the Governor asked me to run with him in 2009 because of my success in that election.

4. Have you mentored women throughout your career? If so, what are your three best tips for success?

As a mentor, if I can give young women the opportunity to discover what is important to them and the support to pursue that dream; they can take those lessons and forge their own path. There are a few pieces of advice I always give:

• Develop, maintain, and expand your circle of women colleagues, and, as author Anna Quinlan once said, “Reach as you rise.” You must pull others up along the way.

• Don’t play by the rule book others write — write your own. You know what needs to be done; you know your business best.

• Plan, but always write your life plans in pencil, because you’ll use the eraser far more than you think you will.

5. What career advice do you give younger women who are climbing the ladder of success and trying to manage life/work/balance?

Do not let others define you because of your gender, your race, where you were born or how much money you may have. If I had followed conventional wisdom, or listened to skeptics, I would not be doing the thing I love today for the state I love.

For those of you juggling family and work, know one day your kids will get it — even if that day is not here yet. I have three wonderful young men on their way or already engaged in great, satisfying careers. They survived. Guilt is not your friend. And remember — don’t put yourself last.

6. What were some moments when you felt treated differently because you’re a woman?

Certainly during the Sheriff’s race in 2007. One gentleman asked me how I could raise a family and work full time. I thought wow, this is the 21st century! But I answered his question patiently because I knew he was not the only one who wanted to know the answer: “I have a lot of help.”

7. More women than men earn college degrees, and increasingly, advanced degrees. Notably, they earn almost half of advanced business degrees. Yet, women only represent 16.9 percent of board directors at Fortune 500 companies. Do you think the conversation around women and leadership is just about power? Why or Why not?

New Jersey’s Partnership for Action, our highly successful economic development engine, is and has been led by women. The NJ/NY metro area is home to approximately 665,700 women-owned firms – the largest population in the US – and New Jersey’s more than 230,000 women-owned businesses employ about 259,000 people and see sales revenues exceeding $44 million annually. It’s clear women can do the job.

I don’t think the conversation is about power; it is about priorities. Often women put other things ahead of climbing the corporate ladder. We also often do not speak up for ourselves. We need to use our amazing ability to collaborate and leverage our obvious value to get a seat at the table in those board rooms.

8. What are important lessons around the topic of women and leadership for you?

I think the most important thing is to work for a world where gender isn’t part of the conversation– where we can celebrate a woman’s success simply because it is success, not because a woman has accomplished it.

9. Please tell me about your parents and how did they influence you? Were there any favorite expressions that were repeated around the table that have become words you live by today?

My mom and dad had a wonderful 5 decade marriage of give and take, sacrifice and love. I grew up debating with them whatever the topic of the day was – politics, war, abortion, and women’s rights. My mother often demanded evidence of our position – “what you assert without proof, I deny without proof.” As kids, we would sometimes just throw out a hot topic at dinner just to watch what would happen next. I often wonder how those debates would have gone today in the world of the internet. We learned to debate, but more importantly we learned how to end an argument as friends and family.

I loved the give and take of the often heated exchange which inevitably started at my Sunday dinner table. As a child, I moved almost 20 times or more before college, and that ability to debate gave me the confidence to speak up for myself in every new place we lived. So, I spoke up, and that also led me naturally to the law.

I am best at moving forward and getting things done without focusing on my office, title or the other “trappings” of this job.

My attitude is we work for the taxpayer, not the other way around. That’s why so many people have my personal cell number in New Jersey. I specifically look for staff members who agree with that vision. We work for you, and the day we forget that, should be our last day on the job.

12. What was the “Aha” moment or turning point in your life that had a direct impact on your career and leadership?

Perhaps I am dating myself, but I had a chance to see Justice Sandra Day O’Connor as she began her first term in my first year of law school in DC. She was the first woman member of the U.S. Supreme Court, and that confirmed for me that the law was my passion and that a woman could do or be anything.